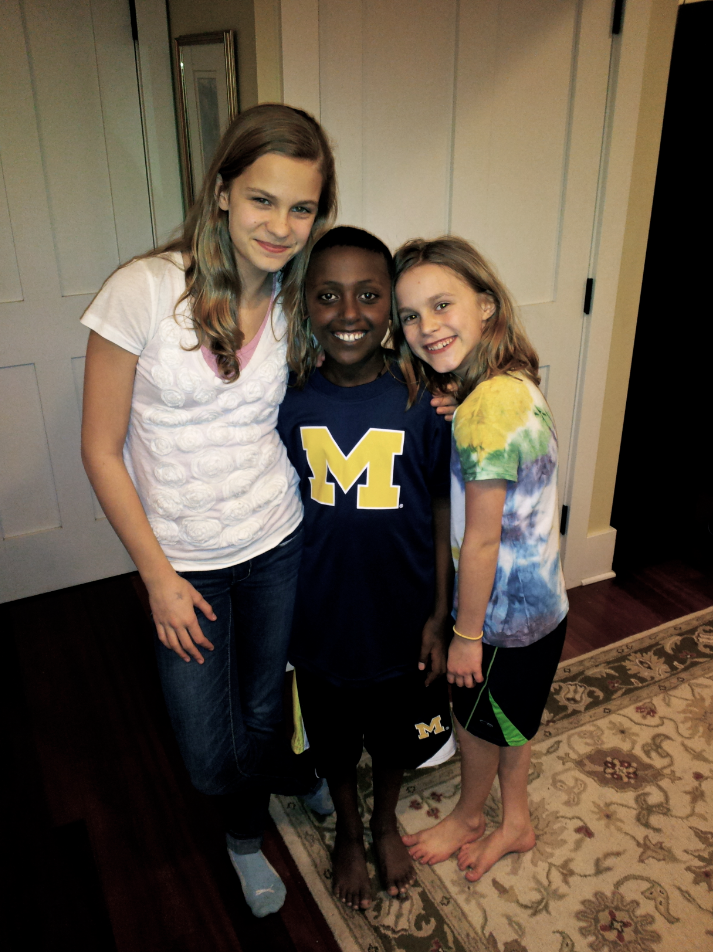 This is such a wonderful and remarkable story! Meet Feleke. A 12 year old boy from Arusi, 6 hours south of Addis Ababa, Ethiopia. He lives in a mud house without electricity. He is the youngest of 8 sibs. His parents are farmers. They are very devoted to their Ethiopian Orthodox Christian faith.

Let’s let Dr. Rick Hodes, an American doctor who has lived and worked in Ethoipoia for over 20 years, tell Feleke’s journey to Ann Arbor:

“Feleke ranks #1 out of 70 students. He loves to be challenged. English is his favorite subject because “it’s hard for me.” When not in school, Feleke enjoys helping around the house. All agree that he’s a great kid – friendly, smiling, upbeat, and always wanting to learn.

Feleke’s parents noticed that he was sick at age 5. He had dental pain and received injections at a nearby clinic. When he was 7, his dad saw swelling in Feleke’s neck, and took him back to a clinic. Doctors could not identify the problem, thus Feleke remained untreated.

When he was 11, his parents noticed that his neck was growing larger and larger. They were worried because Feleke was looking worse and worse, and his classmates were making fun of the way his neck looked. He would come home from school and cry.

His father then brought him to Addis Ababa’s Black Lion University Hospital. They did 2 biopsies – 1 showed a malignant tumor, the other did not. The doctors said Feleke needed chemotherapy. His dad sold all of the family’s cattle to pay for the treatment. This is like cutting off one’s arm.

He had several cycles of a 4-drug regimen. After his 28,000 birr ran out – nearly $2,000 at the time, treatment was halted early. Visiting doctors made promises of treating him, but he never completed full chemotherapy. Nine months ago, someone at Black Lion told Feleke’s family about Dr. Rick. They went to the Catholic Mission and Dr. Rick took over his care. Dr. Rick ordered another biopsy and sent it to the University of Rochester for immunologic stains to better understand Feleke’s condition. They confirmed Hodgkin’s lymphoma, which appears localized to 1 side of his neck.

Feleke’s parents only dream about him becoming healthy. They feel ashamed that they do not have the resources or money to save his life. Feleke hopes that one day he will grow up to become a teacher, because: “being a teacher makes me happy.”

Now here’s where the blessing of visitors comes in: Dr. Jeff Forman, a Detroit radiation oncologist, recently visited Addis Ababa with the Sherman Leadership Mission of the Detroit Jewish Federation. Rick introduced him to Feleke. After examining him and studying his records, Dr. Jeff agreed to provide free radiation therapy.”

But Feleke needed a flight to Detroit, housing for 4 or 5 weeks, and local transport to his 15 sessions of radiation therapy. Enter Ruth Ann Logue and her family! They brought Feleke to Ann Arbor on January 17th to begin radiation treatment for Lymphoma! He’s been in Ann Arbor for over a month now and treatments are going well.

Finally, Feleke took a trip to the UM vs. Illinois game last Sunday, and has become quite the Michigan basketball fan. So let’s see if we can do something special for Feleke during Michigan’s last home game vs. Purdue on February 25th. Stay tuned. I appreciate Steven Weinberg, Dr. Hodes, Dr. Forman, and the Logue family for their graciousness in helping bring Feleke to Ann Arbor. Awesomeness!